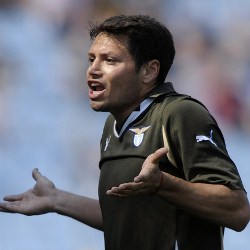 It has been revealed that Lazio refuse to rule out selling striker Mauro Zarate to Tottenham.

Both Spurs and Arsenal have been linked with the former Birmingham City forward.

The arrival of players like Miroslav Klose and Djibril Cisse could push Zarate on to the sidelines again, or force him into a wider role he already complained about last season.

“Zarate’s future? We’ll see what happens,” was director of sport Igli Tare’s response to questions from the media.

“He is an important player for Lazio and is putting in a lot of effort.”