Reports are out claiming that Lazio are moving for Arsenal striker Joel Campbell. 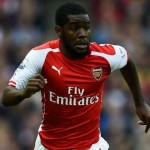 The Costa Rica international is up for sale at Arsenal this summer.

Il Messaggero reported that Lazio plan to bid for Campbell if they reach the Champions League group phase.

Lazio are in a strong position in their qualifying tie with Bayer Leverkusen.

Campbell was also the subject of an approach from Palermo, but he says he will only leave in an outright sale.