It has been reported that Stefan De Vrij says the only reason he is being linked with Manchester United is due to the fact that he is from Holland. 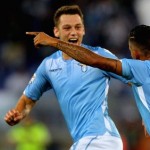 The 23-year-old Lazio defender is one of many Dutch players whose name has been mentioned in the same breath as United since Louis van Gaal took the reins last summer.

However, De Vrij insists he has no plans to leave Lazio anytime soon after he arrived at the Italian club from Feyenoord less than 15 months ago.

“I am continually being linked with Manchester United because Louis van Gaal is their manager,” De Vrij told Il Messaggero.

“A lot of Dutch players are being linked with Manchester United, but there was never anything in it. All I want at this stage is to win things with Lazio.

“Our start to the season was a bit difficult, but we are on our way up again. We are climbing in the table.”