It has been reported that Lazio defender Stefan De Vrij says he’s happy where he is. 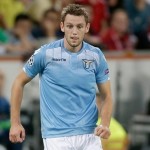 De Vrij admits Manchester United boss Louis van Gaal held talks with him while he was with Feyenoord.

“I never thought I’d come to live in Rome, I’d have happily moved to Germany. Germany is perfect for me, plus it’s close to home. But in life you never know what to expect.

“Lazio immediately made a good impression on me, and I felt at home right away.

“Could I have joined Manchester United? There was never real interest. [Manager Louis] Van Gaal was very clear with me [while Netherlands CT].

“He said: ‘You played a great World Cup, a year ago I would never have thought about calling you up’.

“So translated: ‘You’ve done well, but we’re talking about Manchester United, one of the biggest clubs in the world. Keep it up and who knows what the future holds for you’.

“Lazio came forward seriously, so I called Kevin Strootman who was already playing in Rome [for Roma] to ask for advice.

“I also asked for other opinions, and they were all positive. I started to watch some Lazio matches, and imagined myself on that team.

“The club told me I’d learn a lot in Italy, and in hindsight I can say everything went the right way, I made the best choice.