Chelsea were never truly troubled as they put three past Derby County, who were reduced to 10 men in the pouring rain. 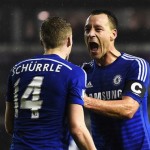 Eden Hazard opened the scoring on 23 minutes after a lovely interchange with Cesc Fabregas liberated him to dazzle the statuesque Derby defence.

Filipe Luis’s beautiful free kick ten minutes into the second half doubled their lead and the game was wrapped up eight minutes from time as Loic Remy’s shot was cleared only as far as Andre Schuerrle, who tapped home with ease.

The hosts had two major spells of attacking play but both were interrupted prematurely. At the end of the first half, an injury to Chelsea’s Kurt Zouma, who took Petr Cech’s shoulder to his face as he made a clearance, enforced several minutes of injury time and ended Derby’s moments of dominance. Then Jake Buxton’s sending-off on 78 minutes, for hauling back Remy, meant they could not get themselves back on top with the man disadvantage.

Indeed, Derby scored with their first shot of the evening through Craig Bryson’s effort on 71 minutes, indicating just how well Chelsea had contained them.

Didier Drogba limped off just after the hour, having landed awkwardly and seeming to have sprained his right ankle.