Liverpool had to come through an epic penalty shoot-out to get the better of Championship side Middlesbrough at Anfield and book their place in the fourth round of the Capital One Cup. 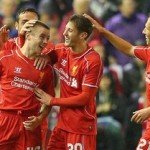 Teenage debutant Jordan Rossiter put the Reds in front after just 10 minutes, despatching a low finish from outside the box, but Boro grew into the game and equalised through Adam Reach’s 62nd-minute header.

Home goalkeeper Simon Mignolet was forced into some smart saves and the Teessiders almost snatched victory when Adam Clayton hit the post in the 85th minute.

Having survived that scare, Brendan Rodgers’ side regained the lead in the 109th minute through a strike from Suso, only for fellow substitute Patrick Bamford to win and convert a penalty in stoppage time to make it 2-2.

In the shoot-out that followed, Bamford saw his effort saved early on before Raheem Sterling did likewise and things moved into sudden-death.

It all added up to another unconvincing display by the hosts in a campaign in which they have lost three of their opening five Barclays Premier League games.

But at least it means they have returned to winning ways ahead of Saturday’s Merseyside derby against Everton at this ground. Torres Wants Liverpool To Be United And Support Rafa Benitez