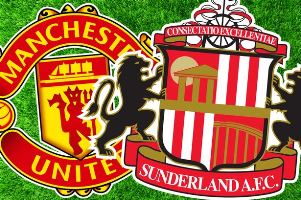 David Moyes will assess the fitness of striking duo Wayne Rooney and Robin van Persie before finalising his starting line-up for the League Cup semi-final clash with Sunderland at Old Trafford.

Rooney (groin) and Van Persie (thigh) have missed four and 10 matches respectively, but were due to return to training on Monday, leaving Moyes to decide whether to involve either player as United looked to emulate their achievements of 2009 and 2010 by overcoming a 2-1 first-leg deficit.

Skipper Nemanja Vidic starts a three-match ban, which is expected to see either Chris Smalling or Phil Jones line up alongside Jonny Evans in central defence.

Defender Vergini and goalkeeper Ustari, who only completed his move to the Black Cats on Tuesday afternoon, will both travel to Old Trafford with the latter almost certain to be on the bench.

Striker Steven Fletcher has suffered no adverse reaction to the Achilles problem which prevented him from starting against Southampton on Saturday, but defender Carlos Cuellar (hip) and keeper Keiren Westwood (shoulder surgery) are still out.