It has been revealed that League One Crewe have reached an agreement with Arsenal to re-sign midfielder Chuks Aneke. 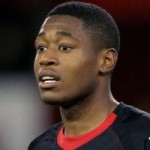 Manager Steve Davis told the club’s official website : “We have managed to reach an agreement with Arsenal over Chuks and we are going to sign him on a six-month loan until January,”.

“We know the talent he has and he will be a good addition to the squad. I initially saw the ability he had and asked the supporters to have patience with him. They did that and in the end we saw what a huge talent he is.

“Chuks is a very creative player, who can play that killer pass behind centre-halves and full-backs. He is a big, strong lad and has two great feet. We are absolutely delighted to have him back. He made his wish to come back here and we can only thank Arsenal for all their help.” Lukas Podolski Delighted To Be Back In Action For Arsenal