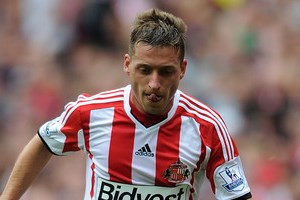 The Italian international has started brightly for the Black Cats since his £8.6million shift from Turin and believes he has made the right decision even if the teams results have not been overly positive.

The 28 year old told reporters : “It’s a different league to get to know but I’m happy because I’ve started in a good way, even if results haven’t arrived,”.

“Leaving Juventus was a very difficult decision to make. It was hard because I left many friends, teammates and a coach in Antonio Conte who made a difference to my career.

“I’m happy with the choice I made though even if I had to give up a top club like Juve.

“I considered a number of factors and not just the economical one. It was a lifestyle choice too, that allows me to play with more regularity.

“I spoke to (Italy boss Cesare) Prandelli and he told me to remain calm. He said he would keep calling me up, whoever I was playing for, if I continued to do well.”