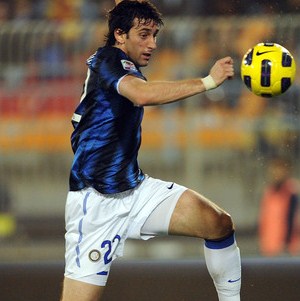 Lecce denied Inter Milan a first win in November with a late equaliser at Via del Mare tonight.

Ruben Olivera levelled 11 minutes from time to rescue a point for the hosts, just three minutes after Diego Milito had broken their resistance.

The draw was Inter’s third game without a win in all competitions following their Champions League defeat to Tottenham and 1-1 Serie A draw with Brescia.

Visiting boss Rafael Benitez was without a host of key players – Wesley Sneijder, Walter Samuel, Julio Cesar, Esteban Cambiasso were all absent through illness or injury – but still had enough chances to put the game to bed, hitting the post twice in the second half.

Please Wait For Video To Load