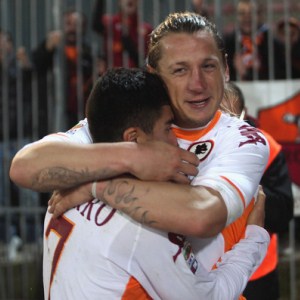 David Pizarro slammed home a penalty in the dying minutes to earn Roma a 2-1 win over struggling Lecce in Serie A.

Roma moved ahead at Lecce’s Stadio Via del mare on 32 minutes when Mirko Vucinic dashed into the home box from the halfway line before planting a shot beyond keeper Antonio Rosati with the home defenders backing off.

Leece launched a spirited recovery and equalised when Guillermo Giacomazzi sent a header spinning into the corner of the Roma net from a delightful ball by Gianni Munari on 75 minutes.

The game looked destined for a draw, but Roma won it when Munari handled in the area from Marco Borriello’s header before Pizarro stepped up to send Rosati the wrong way from the spot for a winner they barely deserved.

Roma are a point behind fifth-placed Udinese and two adrift of Lazio in fourth spot. Lecce remain three points ahead of third-bottom Cesena.