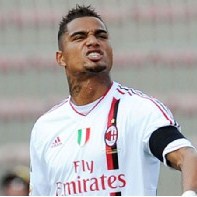 Substitute Kevin-Prince Boateng inspired AC Milan to a thrilling comeback victory in Lecce with a second-half hat-trick for the visitors.

Guillermo Giacomazzi, Massimo Oddo and Carlos Grossmuller established a 3-0 lead for the home side by half-time, but Boateng sprang from the bench to score three goals in 14 minutes to bring Milan level.

Mario Yepes clinched the winner in the 83rd minute as Massimiliano Allegri’s side managed to move up to fifth in the table when they were facing the prospect of dropping as low as 16th at the interval.