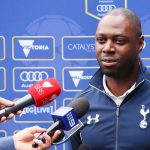 Reports are out claiming that Ledley King believes that Tottenham are better placed than North London rivals Arsenal at the moment.

Despite challenging for the Premier League title last season, Tottenham ultimately finished below arch enemies Arsenal in the table and the late collapse was certainly a bitter pill to swallow for the fans.

Nonetheless, it has to be said that Tottenham enjoyed a fine season overall and now former defender King has gone on to claim that the Spurs squad is in a better position than that of the Gunners ahead of the 2016/17 Premier League campaign.

King told talkSPORT: “At the moment everyone connected with the club feel that the team are in a really good position at the moment.

“Arsenal are probably going to make a few adjustments like every other team, but I think Tottenham probably need the least adjustments moving into next season.

“Obviously every season is a new season and if you don’t perform then you will be found out but looking from the outside as a Tottenham fan, you feel very confident about the current squad and will not have to do too much over the summer.”