Reports are out claiming that Leeds United boss Uwe Rosler is concerned about Sam Byram’s situation. 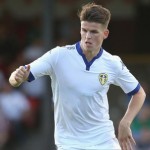 Byram is out of contract next summer and his refusal to sign a new deal – believed to be on reduced terms – has prompted an angry response from Leeds chairman Massimo Cellino.

Arsenal and Liverpool have been linked with a move for the 22-year-old winger, says the Daily Star.

Rosler said: “I spoke to Sam about it on Wednesday. On Thursday we had the day off and [today] I haven’t spoken to him, but [tomorrow] I will speak with him again.

“We will see where we are at that moment in time. When you speak to a player in private, it stays private.

Lukas Podolski : I’m So Happy To Be Joining Arsenal!