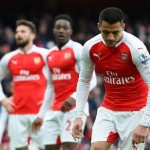 Reports are out claiming that Martin Keown has stated that Arsenal need to be calm in possession in order to stand a chance against Barcelona on Tuesday night.

Many feel that the best way for Arsenal to claim a good result against Barcelona in their UEFA Champions League clash is by playing defensively and adopting a direct approach when on the ball.

However, ex-skipper Keown does not feel that Arsenal should only think about playing long balls and has stated that the key for the Gunners on the night will be to remain calm when they possess the ball.

The former Arsenal defender wrote in the Daily Mail: “They need a combination of keeping possession when they win the ball back and trying to catch them out with longer passes, particularly into the channels.

“Barcelona test your ability on the ball by pressing you, running around in a frantic fashion. If you’re calm, play three or four passes, you’ll keep it and they’ll melt away; if you panic, they will win it back.

“If you can combine that with some early long balls at decisive moments you can punish their full-backs.

“Arsene Wenger might be toying with the idea of playing Danny Welbeck up top, depending on his fitness. His pace could give him the edge over Olivier Giroud for this match. With Alexis Sanchez out on the left, Wenger will need Mesut Ozil feeding them the right passes.”

Iniesta To Have His Life Made Into A Hollywood Movie