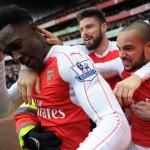 Reports are out claiming that Manchester United legend Paul Scholes has questioned whether the back four can handle Arsenal’s attack on Sunday.

Arsenal defeated United 3-0 at the Emirates earlier in the season and Scholes does not believe Louis van Gaal has the defensive options to cope.

“Arsenal are a really good team with some brilliant attacking players and I’d fear for them [United] a little bit on Sunday with that back four to be honest with you,” Scholes told BT Sport.

“If you look at the pace power and strength Arsenal have, it’s going to be difficult. We know it’s a massive game and a massive step up against Arsenal.”