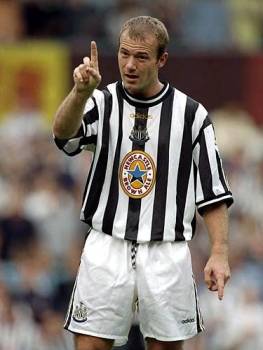 Alan Shearer was born on the 13th of August 1970 and is a former England international striker and now a retired footballer.

He played as a striker in the top level of English league football for Southampton, Blackburn Rovers, Newcastle United and for the England national team. He is widely considered as one of the greatest English strikers of all time, being both Newcastle’s and the Premier League’s record goalscorer.

After retiring as a player, Shearer worked as a television pundit for the BBC. Toward the end of his playing career, Shearer worked towards gaining the UEFA Pro Licence, and expressed a desire to eventually become a manager. In 2009 he briefly left his BBC role to become Newcastle United’s manager in the last eight games of their 2008-9 season, in an unsuccessful attempt to save them from relegation.

A native of Newcastle-upon-Tyne, Shearer made his professional debut with English top-flight club Southampton in 1988, scoring a hat-trick in the process. During several years on the south coast, he became known for his classic style of play, strength and goalscoring ability; he soon received an international call-up along with a transfer to Blackburn Rovers in 1992.

Shearer established himself as a player in northern England; he became a regular in the England squad, and his 34-goal tally helped Blackburn secure the Premier League title in 1994–95. He was named Football Writers’ Association Player of the Year in 1994 and won the PFA Player of the Year award in 1995. The 1995–96 season saw Shearer make his first Champions League appearances and finish as the top scorer in the Premier League with 31 goals. He was also top scorer at Euro 1996 with England, scoring five goals, and in the 1996–97 Premier League, with 25 goals.

A world-record £15 million move to his boyhood heroes, Newcastle United, followed the Euro ’96 tournament, and Shearer spent the remainder of his career with the club. While he would never emulate the success of his time at Blackburn Rovers, Shearer won runners-up medals in the Premier League and FA Cup with Newcastle, and a second PFA Player of the Year award.

After being named England’s captain in 1996 and Newcastle’s captain in 1999, he retired from international football following Euro 2000, having amassed 63 appearances and 30 goals for his country.

As well as his media work, he has raised substantial amounts of money for various national and local charities, both within and outside of sports.

As a player, Shearer was often styled as a classic English centre-forward, owing to his strength, physical stature, heading ability and strong shot. Of his 206 Newcastle goals, 49 of them were scored with his head. Earlier in his career, especially at Southampton, Shearer played a more creative role; providing chances for fellow strikers, and making runs into space, owing to his early development as a midfielder.

Later on in his career, Shearer played a more forward role; his age meant that he lost much of the pace which served him on the south coast. Able to hold the ball up well, he also functioned as a target man, providing balls for other players. Although his strength allowed him to hold on to the ball, his playing style sometimes brought him criticism; most commonly that his play was too physical, and that he used his elbows too aggressively; it was this which contributed to both of his sendings off, although one was later rescinded on appeal. As well as the two red cards, Shearer received 59 yellow cards during his career.

Shearer was noted as a proficient penalty taker for both club and country, and he scored 45 times from the spot for Newcastle, where he was the first-choice taker. He also scored 5 goals from free-kicks for the north-east club.