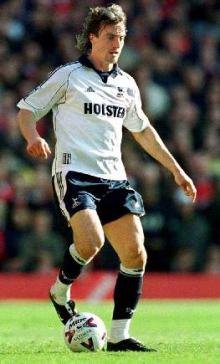 David Ginola was born on 25th of January 1967 in Gassin, Provence-Alpes-Côte d’Azur and is a former French international football player who has also worked as an actor and model.

He began his football career in his native France before moving to England in 1995 when he signed for Newcastle United and stayed in the country until retiring seven years later, having subsequently turned out for Tottenham Hotspur, Aston Villa and Everton. He was also a regular player for the French national team during the 1990s.

During his career he cultivated a reputation as a stylish maverick, often clashing with his coaches. Since his retirement from the game in 2002 he has become involved in several new pursuits, including acting.

Ginola was renowned for his “magical” touch on the ball and his ability to get past players from any type of position and then manage to score a goal. His ability to do that was shown in games for Tottenham and Newcastle, with his most memorable goal in Newcastle’s stunning 5–0 win over Premier League giants Manchester United on 20 October 1996, becoming a flamboyant part of the memorable “Entertainers” Newcastle side of his era, which also featured other highly acclaimed players including Alan Shearer, Les Ferdinand, Rob Lee and Keith Gillespie.

In 1999 before the Euro 2000 tournament, Dutch legend Johan Cruijff remarked that it was his belief that Ginola was currently the best player in the world.