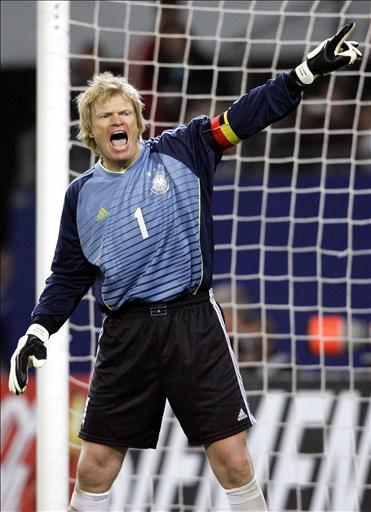 Oliver Rolf Kahn was born on 15th of June 1969 in Karlsruhe and is a former German football goalkeeper. He started his career at Karlsruher SC and in 1994 was transferred to Bayern Munich, his last professional club. He is one of the most successful German players in recent history, having won eight German championships, six German cups, the UEFA Cup (1996), the UEFA Champions League and the Intercontinental Cup (both 2001).

His individual contributions have earned him four consecutive UEFA Best European Goalkeeper awards, three IFFHS World’s Best Goalkeeper of the Year awards, the Golden Ball at the 2002 FIFA World Cup and two German “Footballer of the Year” trophies. He played for the German national team (from 1994 to 2006), where he was starting goalkeeper of the 2002 World Cup squad which reached the Finals and won the FIFA World Cup Golden Ball for his performance. Kahn is nicknamed “King Kahn” or “The Titan” due to his formidable presence and influence.

He made his last professional appearance for Bayern Munich on 27 May 2008 at the Salt Lake Stadium (Yuvabharati Krirangam), Kolkata in a friendly against Mohun Bagan of India during Bayern’s Asian tour of 2008. Around 120,000 people turned up for the match. The match ended 0-3 in favour of Bayern and Michael Rensing substituted ‘King Kahn’ in the 55th minute. He is considered to be one of the greatest goalkeepers of the game and is the only goalkeeper in the history of football to win the FIFA World Cup Golden Ball (in World Cup 2002).