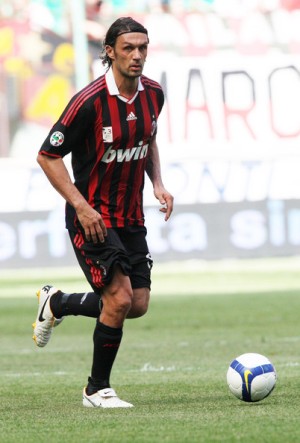 Paolo Cesare Maldini was born on the 26th of June 1968 in Milan and is a former Italian footballer who is often considered to be one of the greatest defenders to have ever played the game. Having spent his entire club career at A.C. Milan, Maldini played for 25 years until the age of almost 41.

In that time, he was a winning member of seven Italian Serie A championships, one Coppa Italia, five Supercoppa Italiana, five UEFA Champions League Cups, five UEFA Super Cups, two Intercontinental Cups and one FIFA World Club Cup. His key strengths as a player were his electric pace, the ability to execute precision tackles and his leadership influence on and off the pitch. His father is Cesare Maldini, a former player and Milan captain and a successful national U-21 coach.

Maldini is currently the Joint record holder of international appearances, along with Fabio Cannavaro, with 126 caps, since his debut in 1988. He retired from the national team in 2002 after nearly 8 years as team captain.

Maldini has played over 647 competitive matches for AC Milan and scored 29 goals playing in defence.