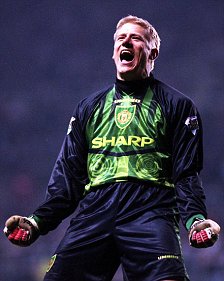 Peter Boleslaw Schmeichel was born on the 18th of November 1963 in Gladsaxe, Denmark and is a retired Danish professional footballer who played as a goalkeeper, and was voted the “World’s Best Goalkeeper” in 1992 and 1993. He is best remembered for his most successful years at English club Manchester United, whom he captained to the 1999 UEFA Champions League to complete The Treble. He was also a key member of the Denmark national football team that won Euro 92.

Schmeichel is famous for his intimidating physique (he is 1.93 m (6 ft 4 in) tall and wears specially-made size XXXL football shirts) and his attacking threat. During his career, Schmeichel scored 11 goals, including one for the Danish national team, a great feat for a keeper. He is also the most capped player for the Denmark national team, with 129 games between 1987 and 2001.

Apart from Euro 92, he played for his country at the 1998 FIFA World Cup and three additional European Championship tournaments. He captained the national team in 30 matches.

Schmeichel is also known for his trademark shouts at his defence. He would often yell out at the defenders in charge of helping him defend the goal for blunders and poor defending and would occasionally single out various individuals in the defence to make his feelings heard.

Today, he is widely regarded as one of the greatest goalkeepers in the history of football. Schmeichel is ranked among the top ten keepers of the 20th century in 2000, and in 2001, Schmeichel won a public poll held by Reuters, when the majority of the 200,000 participants voted him as the best goalkeeper ever, ahead of Lev Yashin and Gordon Banks.

In 2003, Schmeichel was inducted into the English Football Hall of Fame in recognition of his impact on the English game. In March 2004, he was named as one of the “125 greatest living footballers”, at the FIFA 100 celebrations.

His son, Kasper Schmeichel, is also a goalkeeper and currently plays for Manchester City F.C.