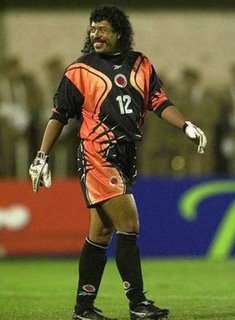 José René Higuita Zapata was born on August 27, 1966 in Medellín (Barrio Castilla) and is a former Colombian international football goalkeeper. He has played 68 international matches for the Colombian national team, in which he scored three goals.

Higuita played the majority of his club career with Colombian side Atlético Nacional, where he helped the team win the Colombian League on numerous occasions as well as the Copa Libertadores and Copa Interamericana, both in 1989.

He is famed for inventing the scorpion kick, a clearance where the keeper jumps forward, arches his legs over his head and in doing so, kicks the ball away with his heels. This save earned him notoriety when he pulled it off in a friendly game against England in September, 1995, blocking a mistaken cross by Jamie Redknapp. It ranked 94th in Channel 4’s 100 Greatest Sporting Moments in 2002 and was voted football’s greatest trick in an online poll in July 2008.

On the pitch, Higuita is known for having an eccentric playing style, taking unnecessary risks, and actively trying to score goals. He is also prone to blunders, and it was a mistake by him that knocked Colombia out of the 1990 World Cup, where he seemingly dithered with the ball at his feet 35 yards from goal enabling Cameroon striker Roger Milla to dispossess him and score, putting his team through to the quarter-finals. As a result of such behaviour, Higuita was nicknamed “El Loco” by media and fans alike. 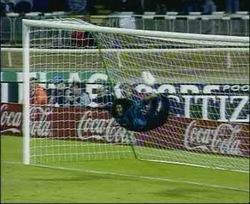 I Wanted To Finish My Career At Arsenal! – Patrick Vieira