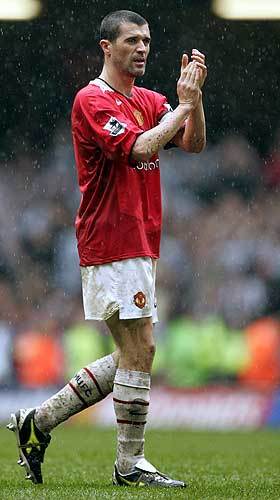 Roy Maurice Keane was born 10th of August 1971 in Mayfield, Cork and is a retired Irish footballer and the manager of English Championship club Ipswich Town.

In a highly successful 18-year career, he played for Cobh Ramblers in the League of Ireland, Nottingham Forest and, most notably, Manchester United (both in England), before ending his career with a brief spell at Celtic in Scotland.

A dominating central-midfielder, Keane was noted for his aggressive and highly-competitive style of play, an attitude which helped him excel as captain of Manchester United from 1997 until his departure in 2005. Keane helped United achieve a period of unprecedented success in more than 12 years at the club, during which he established himself as one of the greatest players in the club’s history.

He played at international level for much of his career, representing the Republic of Ireland over a period of fourteen years, most of which he spent as captain. In the 1994 FIFA World Cup he played in every game, although he went home from the 2002 World Cup after an argument with national coach Mick McCarthy, after Keane claimed that the Irish players were being treated poorly.

During his first season as Sunderland manager, he took the club from twenty-third position in the Coca-Cola Championship to win the league and gain promotion to the Premier League. Keane’s arrival has been largely attributed as the catalyst for Sunderland’s recovery.[1] He managed to keep Sunderland from relegation in the 2007–08 season, but in his second season as a top-flight manager he left his position with Sunderland in the relegation zone.[2].In April 2009 he was appointed as manager of Ipswich Town. Tony Adams Should Be Next Arsenal Manager – Redknapp