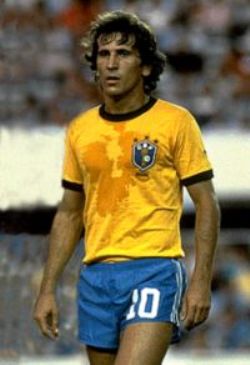 Arthur Antunes Coimbra was born on 3rd of March 1953 in Rio de Janeiro, and is better known as Zico. He is a former Brazilian footballer and coach. Often called the White Pelé, he is commonly considered one of the most skilled dribblers and finishers ever and possibly the world’s best player of the early 80’s. He was also known as one of history’s greatest free kick specialists, able to bend the ball with pace and accuracy as well as having an extremely powerful shot. The gifted midfielder was named by Pelé as one of the top 125 greatest living footballers in March 2004. Also according to Pelé, generally considered the best footballer ever, “throughout the years, the one player that came closest to me was Zico”.

Zico scored 52 goals in 72 international matches for Brazil, and represented them in the 1978, 1982 and 1986 World Cups. They didn’t win any of those tournaments, even though the 1982 squad is considered one of the greatest Brazilian national squads ever, along with the one that won the 1970 World Cup. Zico is often considered one of the best players in football history not to have been on a World Cup winning squad. He was chosen 1983 Player of the Year.

Zico has coached the Japanese national team, appearing in the 2006 FIFA World Cup and winning the Asian Cup 2004, and Fenerbahce, who were a quarter-finalist in 2007-08 in the Champions League under his command. He was announced as the head coach of CSKA Moscow in January 2009.

Juventus Legend Alessandro del Piero Yet To Decide Next Move Thierry Henry Delighted To Be Back At Arsenal