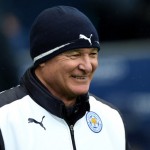 Reports are out claiming that Leicester City boss Claudio Ranieri says all the pressure is on Arsenal ahead of Sunday’s clash.

Gunners boss Arsene Wenger has attempted to unsettle the visitors with mind-games in the build up.

But Foxes boss Ranieri, whose side cost just £22million, hit back: “Maybe it is the key match for him, not for us.

“The pressure is on the other teams. Arsenal have big pressure because Arsene spends a lot of money every year.

“We don’t have pressure because we did our job. Our goal is OK – anything more is fantastic.

“People want to put pressure on us because at the beginning they said: ‘OK Leicester sooner or later will drop go down’.

“But now some people are thinking Leicester can win. It is important to put pressure on them because they spend a lot of money and if they don’t win it is a disaster.”