It has been reported that Leicester City boss Nigel Pearson was pleased with their 1-1 draw against Arsenal. 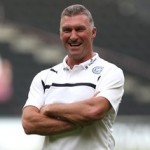 It was the striker’s second goal of the season, although he missed a fine chance in the second half to win the game.

But Pearson believes his side, who have drawn two and lost one of their opening three Barclays Premier League games since promotion, are improving.

“I think when you have a group of players, and a lot haven’t experience the Premier League before in this intensity, the three games we have had have been pretty tough,” he said.

“They can reflect on the game and know we can get better and improve but they have given as good as they got.

“That should give them confidence.

“There isn’t really a great deal of pressure on the players because no-one expected us to beat them. The pressure is on when people make assumptions you should win games. We have to make sure how we judge our players is based on the standards we set ourselves.

“I am pragmatic on how I look at fixtures and reflect on performances.”