It has been reported that Leicester City skipper Wes Morgan insists Arsenal were fortunate to escape with a point yesterday. 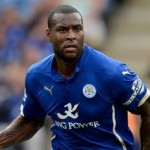 Leo Ulloa cancelled out Alexis Sanchez’s opener for the Gunners as the sides played out a 1-1 draw at the King Power Stadium.

“I think that was the least we deserved,” the impressive Morgan told Sky Sports 1.

“We created quite a few chances, we might not have had the most of the possession, but we had chances.

“We concentrated well, worked hard to limit their chances.

“People watching will see our performance and know Leicester are a team they cannot take lightly.”