Reports are out claiming that Leicester City are launching a bid for Birmingham City winger Demarai Gray. 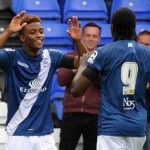 The Daily Mail reported that Leicester are ready to make an offer for Gray.

The 19-year-old is still being linked with a move away from St Andrew’s despite having signed a new three-year contract with the club in July.

Gray has been the subject of multiple bids from Barclays Premier League newcomers Bournemouth, who it is thought made a fresh offer for the teenager in June.

The talented youngster is also wanted by Manchester United, Arsenal and Liverpool.