It has been reported that Leicester City fullback Paul Konchesky is thrilled to be playing in the Premier League this season. 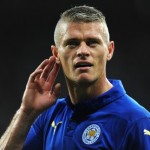 Konchesky, who has played in the Premier League before with Charlton, West Ham, Fulham and Liverpool, said it was great to be back in the top flight again.

“I am enjoying every minute of it and it is good to be back,” he told the Leicester Mercury.

“The (Manchester) United win was fantastic.

“It was horrible conceding three goals as a defender, but to score five was fantastic.

“When we scored one we knew if we kept attacking we could get a result. It proved we could.”