Reports are out claiming that Leicester City midfielder N’Golo Kante is a target for Arsenal. 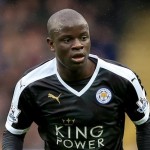 Kante, 24, has been a revelation in defensive midfield for the Foxes since his arrival from French outfit Caen.

Leicester paid a paltry £5.6m for the tireless enforcer but could almost quadruple their outlay with Kante now valued at £20m.