Reports are out claiming that Manchester United midfielder Nick Powell is a target for Premier League new-boys Leicester City. 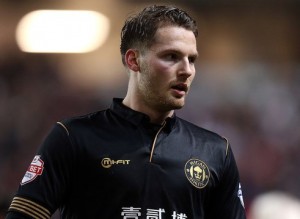 The Daily Express claims that the England Under-21 international has spent the last season on loan at Wigan, helping the club to a play-offs spot with nine goals and three assists.

And now Foxes boss Nigel Pearson is keen to sign Powell in a cut-price deal, having already used United’s reserves in 2012 to build his promotion-winning squad.