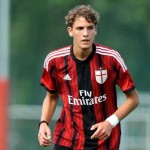 Leicester boss Claudio Ranieri has sets his sights on prising Locatelli away from AC Milan, says the Mirror.

Arsenal have also scouted the 18-year-old who has already been rated as “a future captain of Milan” by Mauro Bianchesi, the Italian club’s head of scouting.

Ranieri believes he can tempt exciting Locatelli to the Premier League as Milan are struggling to make next season’s Champions League while Leicester’s place in the competition’s group stages is already confirmed.