It has been revealed that Leicester City are seeking a loan deal for Manchester United midfielder Andreas Pereira. 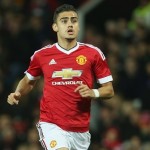 The Daily Mail claims that the Foxes have expressed an interest in the 20-year-old who has been told he can leave on loan ‘to the right club’.

Pereira has only started two matches for Louis van Gaal this season, both in the Capital One Cup.

The Brazilian said: “Of course you want to play every game, but I have been on the bench. We will see what happens.”

No official approach has been made by Leicester and it is believed United would reject any offer made.

The Red Devils recognise Claudio Ranieri’s men are now legitimate competitors for a Champions League place and would rather Pereira go somewhere else.