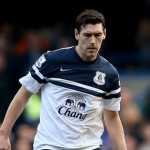 Reports are out claiming that Leicester City have joined the battle for Manchester City midfielder Gareth Barry.

The Sun reported that the Foxes are lining up an ambitious move to sign Barry on a free transfer from Manchester City.