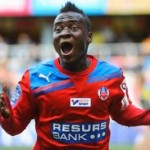 It has been reported that Helsingborg striker David Accam is a target for a trio of English clubs.

Sky Sports reports that the 23-year old Ghanaian, who spent time in England in formative years, has emerged on the radar of Premier League returnees Leicester City.

The Manchester United target starred with Ostersund in 2012 before Helsingborgs signed him from the Swedish third division and his performances in the Allsvenskan have also alerted Championship sides Norwich City and Brighton & Hove Albion.