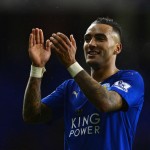 Reports are out claiming that Leicester City defender Danny Simpson insists all the pressure is on Arsenal going into Sunday’s game.

The Foxes now sit five points clear of Tottenham and Arsenal with 12 matches to go, with bookmakers now labelling Leicester title favourites after their convincing recent victories over Liverpool and Manchester City.

Simpson told Sport magazine: “We’ve lost two games so far: Arsenal and Liverpool. And we bounced back from both of them.

“People are generally expecting us to slip up against these teams. They’ve been building their squads for years, whereas we’ve been in the Premier League only for a year and a half. Yeah, the table says something different, but we approach these games the same way we always have…

“There’s definitely more pressure on the other sides up at the top. Most people expect Arsenal and Man City to win the league. So we just go into our games with no pressure. We can just do what we do. That’s how we’ve been from the start of the season, so why change now?”