Reports are out claiming that Marc Albrighton insists Leicester City do not fear Arsenal ahead of the clash between the two sides this weekend. 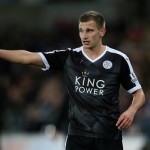 The high-flying Foxes head to the Emirates Stadium to take on the third-placed Gunners in what could be a season-defining contest.

As league leaders Leicester prepare for the potentially monumental encounter, winger Albrighton says the East Midlands club are confident of taking down Arsene Wenger’s side.

When asked if there is a fear factor taking on Arsenal, Albrighton said: “I don’t think there is. We have not feared anyone we have played this season.

“In a couple of games, we have probably showed teams a bit too much respect and they are the games where we have come unstuck.

“But there is no fear at all. We are confident. There is no reason why we can’t go there and cause another upset.”

Leicester make the trip to North London this weekend on the back of a stunning 3-1 victory over Manchester City at the Etihad Stadium on Saturday.