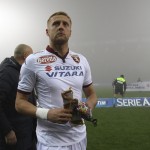 Reports have emerged claiming that Torino centre-back Kamil Glik is a target for Premier League clubs.

Glik has been linked with Arsenal this season.

However, Tuttosport claims that Leicester City and Newcastle United are keeping close tabs on Glik.

However, the 28-year-old Poland international – who is contracted to the Serie A club until the summer of 2020 – is expected to cost at least €10m to buy.

Arsenal Give Alex Oxlade-Chamberlain His Own TV Show