It has been reported that Leicester City boss Nigel Pearson is confident he can convince Kasper Schmeichel to stay. 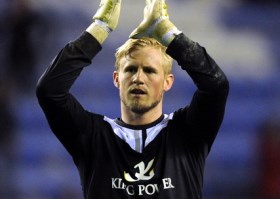 Pearson is determined to keep the Denmark international at Leicester despite reported interest from Arsenal, AC Milan and Southampton.

“I’ve been informed that there’s been speculation,” he said. “That goes with the fact he’s had an exceptionally good season. He’s a talented goalkeeper and it doesn’t surprise me.

“But he’s a key player for us and I’d love to keep him. I’ve spoken to Kasper on a number of occasions and talks are ongoing. We have an exceptionally good relationship, player to manager, and all I can say is the player knows exactly how much I want to keep him.”

Mikel Arteta : We Showed That Arsenal Is Not Dead! Arsenal Set To Play TWO Friendlies In India This Summer