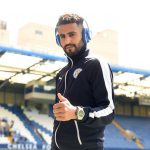 Reports are out claiming that Leicester City are prepared to sell Riyad Mahrez this summer.

The Sun reported that they have offered star winger Mahrez a new £100,000-a-week contract.

And the Premier League champions will slap a £30m asking price on the Algerian should he reject their proposal.

Arsenal, Manchester United and Barcelona are all reported to be chasing the 25-year-old.

Leicester have insisted they do not want to sell their star players but have already seen Arsenal activate Jamie Vardy’s release clause while N’Golo Kante is also attracting interest from several clubs.

Louis van Gaal Expected To Be At Old Trafford Tomorrow