Reports are out claiming that Leon Britton hailed Swansea City’s character after their 2-2 draw at Arsenal. 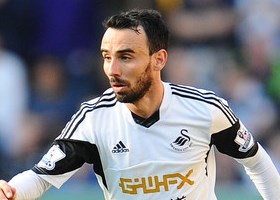 Britton was involved in the move which led to Mathieu Flamini’s bizarre own goal in stoppage time.

Britton told Sky Sports : “To come away with a point in the end, we’re happy with that,”.

“We stayed in front for quite a long time and then all of a sudden we find ourselves 2-1 down in the space of a minute.

“It’s tough then, but I thought we showed great character to come back and keep pushing, keep pushing and to get a goal right at the end there, it was a bit fortunate but we’ll take that.

“I was stumbling and I was on the way down to be honest but we haven’t had much luck lately and we needed a little bit of luck today. We got that with the goal.

“We’ve come away with a point today and now we’ve got a tough home game against Norwich on Saturday.”