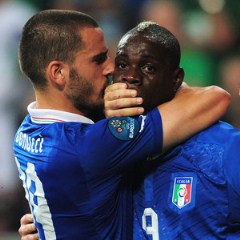 Leonardo Bonucci has explained his clash with Mario Balotelli during Italy’s victory over the Republic of Ireland.

The Manchester City striker scored with a sensational overhead kick, but then started to shout something until Bonucci clasped a hand over his mouth.

“He said something in English, so I’ve no idea what it was! Unfortunately, Mario is very instinctive and that is also his strength. Without that personality he wouldn’t have scored such a great goal.”

It’s believed SuperMario was sending a message to the Irish fans who jeered heavily when he stepped on to the pitch. Samir Nasri Wants To End His Career In The MLS