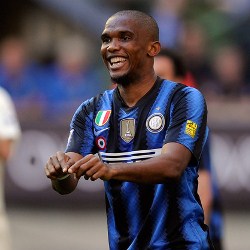 Transfer news from the Italian Serie A is out and it has been revealed that former Inter Milan boss Leonardo is keen to bring Samuel Eto’o with him to PSG.

Leonardo has been appointed new sports director at PSG and with the financial backing of their Qatari owners, he has the support to go for the Cameroon international striker.

The 30 year old striker has declared he could leave Inter and Italy this summer – though favours the Premier League.

Tottenham and Arsenal have been linked with the Cameroon ace since he declared his intentions.

Meanwhile, France Football says Leonardo plans to meet with Eto’o later today to discuss the prospect of a PSG move.