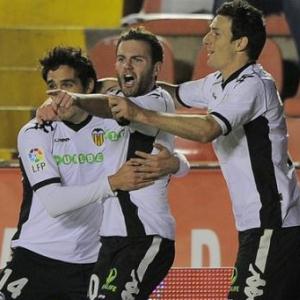 High-flying Valencia broke Levante hearts in the city derby with a late Juan Mata strike giving them a 1-0 win and all three Liga points.

Mata, who missed a first-half penalty, dispatched coolly into the bottom corner when put through on goal in the 83rd minute – but he looked just offside.

It was cruel on Levante, who battled hard in a fiery derby match but lacked quality in their opponents’ half.

Mata, whose penalty clipped the crossbar after Miquel Robuste blocked Hedwiges Maduro’s run just inside the box, also hit the woodwork with a delicious free-kick in the second half – home keeper Manolo Reina getting fingers on it.

The result puts Los Che two points behind Villarreal, who lost 4-2 at Real Madrid, as they stay fourth. Levante remain just outside the relegation zone.