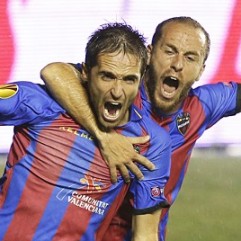 Levante took a giant stride towards making the Europa League knockout stages as a Michel penalty and two goals from Pedro Rios guided them a 3-0 victory over FC Twente.

The Eredivisie leaders enjoyed the better of the first period and were controversially denied the opening goal when Dusan Tadic’s strike was ruled out because Luc Castaignos was in an offside position and adjudged to have been active.

Steven McClaren’s men were even less pleased with the officials just before the hour mark when a penalty was harshly awarded for Douglas handling Nikos Karabelas’ cross and Michel calmly slotted away the spot-kick.

And, with Twente chasing an equaliser, they were caught out on the break as Rios was twice left with the easiest of finishes to roll the ball home and tighten the Spanish side’s grip on second place in Group L.