It has been reported that Lewis Holtby has enjoyed preseason under new Tottenham manager Mauricio Pochettino. 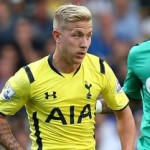 The German midfielder has been impressed by the Argentine’s impact so far.

“I think he’s a very good manager,” he said.

“I don’t want to compare managers as everyone has their own style, but he’s very positive – he wants to play attacking football, pressing football.

“It suits everybody at the club. Everyone’s happy with the way we train, the way we work, and he’s so ambitious. We’re very positive to go into the season and do very well.”