Reports are out claiming that Arsenal legend Liam Brady has slammed the state of their defence. 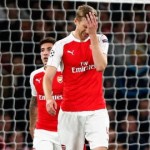 The 3-2 defeat to Olympiakos badly damaged their European hopes and a number of fans have called for Arsene Wenger to go in the wake of their Greek tragedy.

“We don’t have a problem in the forward area, not as much as people like to make out,” he told talkSPORT.

“Theo will play. He scored again last night and did really well for Sanchez’s goal.

“I think our defending, especially in set pieces, is where we really need to get better.

“We dominated the game, but we defended poorly from set-pieces and it cost us dearly.

“We lost a goal at Zagreb and two goals against Olympiakos to set-pieces. The first goal was bad last night, the ball coming into the box and players not really knowing what’s going on. The marking and concentration has got to be a lot better.

“If we get these things right the results will be more consistent and we won’t have this up and down situation we’re having at the moment.”