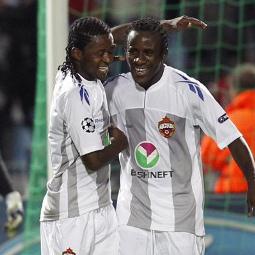 Seydou Doumbia’s last-minute strike rescued a point for CSKA Moscow after the Russian side had looked down and out in their Champions League Group B opener in Lille.

Goals by Moussa Sow and Benoit Pedretti had the French champions well in control after an hour of the encounter at Stade Metropole, with their opponents looking out of sorts during a one-sided opening half.

But the Russians were a different proposition after the break, and after Doumbia reduced the deficit with his first 18 minutes from time, the Ivorian doubled his tally in the final moments to shatter the Lille faithful and seal a share of the spoils.