Reports are out claiming that Arsenal striker Yaya Sanogo is set for a new loan move next season. 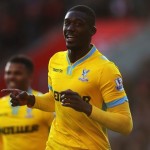 Le 10 Sport claims that Lille have made an approach to Arsenal over the possibility of signing Sanogo on loan.

The 22-year-old spent the second half of last season at Crystal Palace, but managed just one goal for Alan Pardew’s side.

Sanogo is unlikely to play a major role for Arsenal next season, and Arsene Wenger is considering sanctioning the move.