Reports are out claiming that Lille attacker Salomon Kalou is keen on a move to Arsenal. 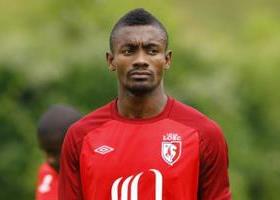 The Daily Mail reported that the former Chelsea forward, currently at French club Lille, is keen on a return to the Barclays Premier League in the next transfer window.

And the 28 year old, who has a £2.5million release clause, has instructed his advisors to gauge interest among English clubs ahead of January.

Arsenal are among those who have been made aware of the Ivory Coast international’s availability in recent weeks.